We received a wonderful story from Allan Laurence, who owns the first Surtees ever imported to Australia and he shared his amazing story with us:

I was first introduced to Surtees Boats through the manufacturing business formerly known as Surtees Trailers. After some design discussions with Neil, construction commenced in June 1998 to build a center console cuddy in a 5.5 meter Workmate hull. Upon completion, the boat was loaded onto a custom trailer built by Neil’s father Alan before being towed to the Port of Tauranga. The trailer was fitted with twelve double-wobble rollers, a catch and release mechanism and a detachable drawbar to facilitate loading into a twenty-foot container. As the Union ship set sail from New Zealand, I began the long drive south from the Northern Territory to be at the Port of Melbourne by the time it arrived. With Australian Customs and port formalities complete, we then set about to take a more leisurely drive back to Darwin via Victoria’s Great Ocean Road, Adelaide and Ayres Rock (Uluru). Back home after 4500 kms, it was then a matter of deciding what power plant to attach. Had I foreseen the impending demise of OMC, a Johnson 90HP V4 Ocean Runner would not have been my choice. Fortunately, the motor has performed well and has just undergone its first major service in 22 years. 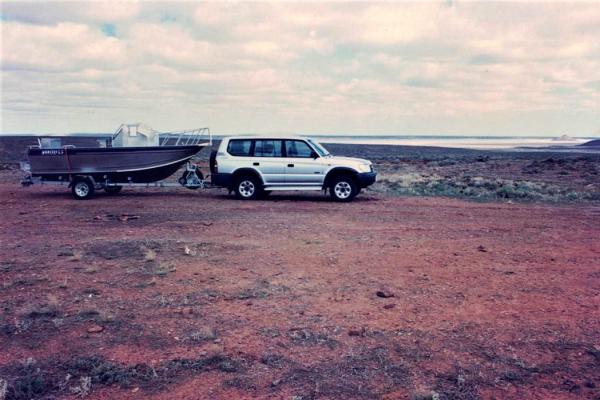 South Australia July 1998 on the drive north to Darwin. The packing slip can still be seen attached to the cuddy console.

My Surtees 5.5m Workmate fully rigged and in company with my fish spotter.

Life in the Northern Territory

The ‘Top End’ offers local fishos the best of both worlds with the choice of fresh and salt-water sport and recreational fishing. To the east of Darwin we have the Adelaide River, famous for its jumping crocodiles. Further along the Arnhem Highway we have the Mary River and its wetland billabongs, then the South and East Alligator Rivers on either side of Kakadu National Park. To the southwest we have the Finnis River and the mighty Daly River, home to the Barra Nationals fishing competition. If you are looking for sheltered salt water fishing then Darwin and Bynoe Harbours together provide over 5000 square kilometres in which to drop a line. In the relatively shallow offshore waters you have the choice of shoals, sunken wrecks and artificial reefs. Although the NT is the only jurisdiction in Australia that does not require you to have a boat licence or registration, there are some big traps for unweary newcomers. First and foremost the eight meter tides have left many boaties stranded, either on the water or at the boat ramp. There is also the tyranny of distance, whether you are fishing miles up an inland waterway or offshore and out of sight of land. Over the years my GPS has recorded 5000 nautical miles of seafaring, aided by the generous 150-litre inbuilt fuel tank that forms my seat. And not all outings have been fishing expeditions with the Surtess often doubling as a tourist boat to show off local sights to visiting friends and relatives. 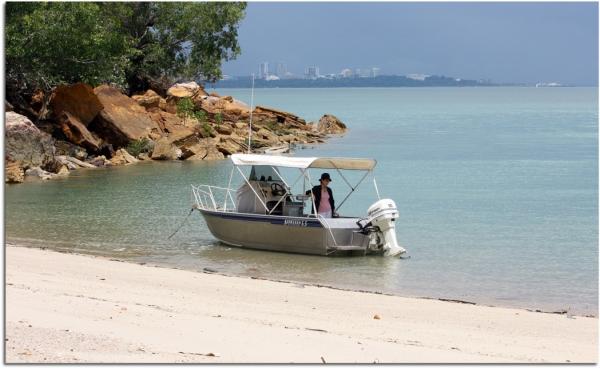 Taking a break from fishing on Darwin Harbour 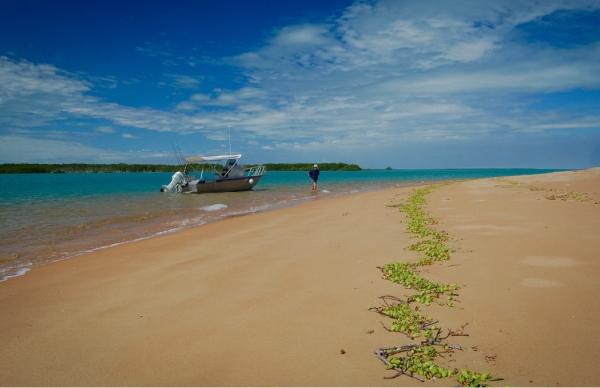 Anchored at Bare Sand Island, a former RAAF bombing range to the southwest of Darwin. A popular tourist local to view hatching turtles. 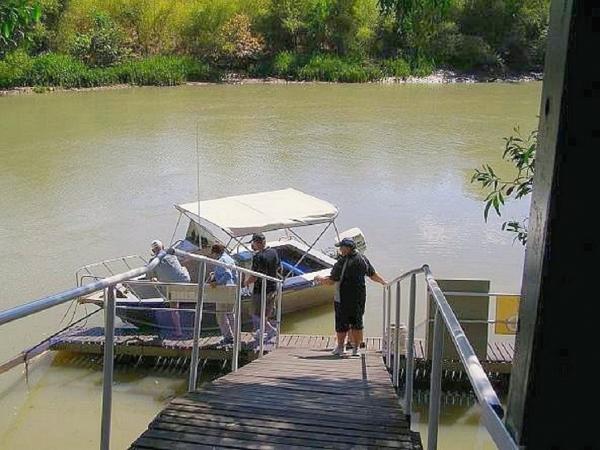 Doing the tourist thing at Goat Island on the Adelaide River east of Darwin. 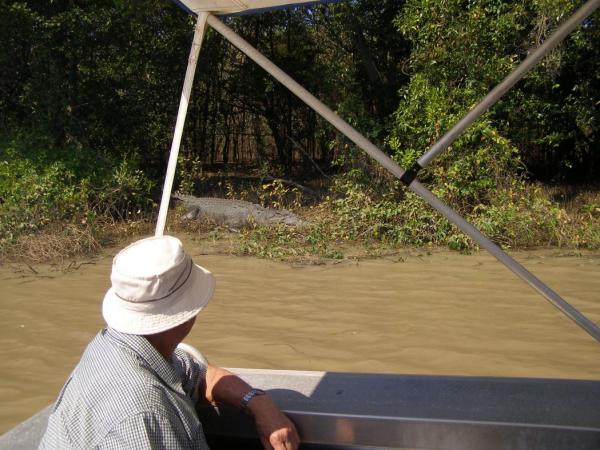 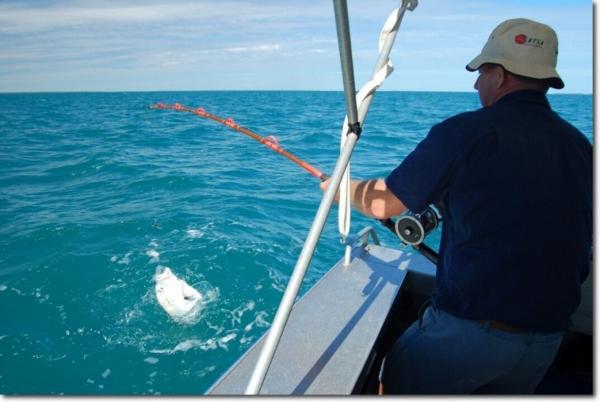 That’s me playing a GT offshore from Darwin

The move to Tasmania

After 20 years in the Territory, the Surtees has recently experienced a major sea change, from the warm tropical waters of the Timor and Arafura Seas to the cold waters of the Southern Ocean. Having purchased a property in Australia’s southernmost town of Dover, the boat doubled as a removal trailer. Firstly, the trailer was substantially refurbished with the addition of heavy-duty springs. Next, a canopy was built over the boat, clamped to the gunwales. Then loaded with around 750 kilograms of personal possessions, (including tackle and fish smoker) we ‘set sail’ for the drive south in November 1998. Once again at the Port of Melbourne the Surtees was loaded into the bowels of a ship, this time being the Spirit of Tasmania for the crossing of Bass Strait. Despite the heavy load, none of the twelve double-wobble rollers left any indentation in the plate alloy hull. But it wasn’t a case of once unpacked and let’s go fishing. My 30 plus years of seafaring in New Zealand and Northern Territory waters counted for nothing. I now needed a recreational boat licence and of course no boat is seaworthy until you pay an annual $81.00 registration fee. Eventually I got it all sorted so it was off to catch my first Flathead. Did I say “catch”, well they virtually jump into the boat if you drag a bait across the seabed. With Dover being the centre of the Tasmanian salmon farming industry and a major port for cray and abalone fisherman, we are never short of a seafood plater. I’m currently back in Darwin to sell our house before moving permanently to Tasmania. First job, build a new boat shed. 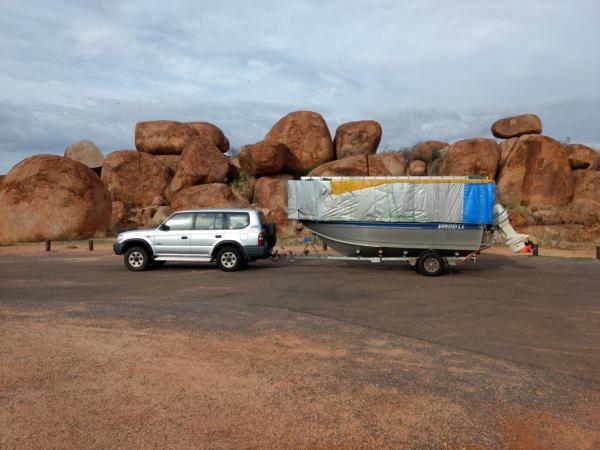 My Surtees at the Devils Marbles south of Tennant Creek NT, doubling as a removal trailer. 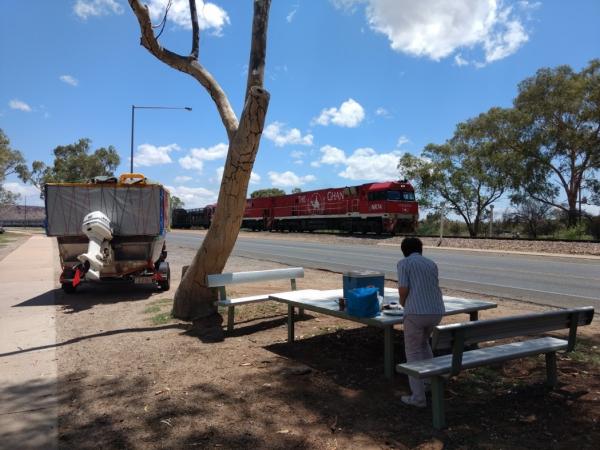 Parked up for lunch at The Gap, Alice Springs, as The Ghan passenger train heads north. 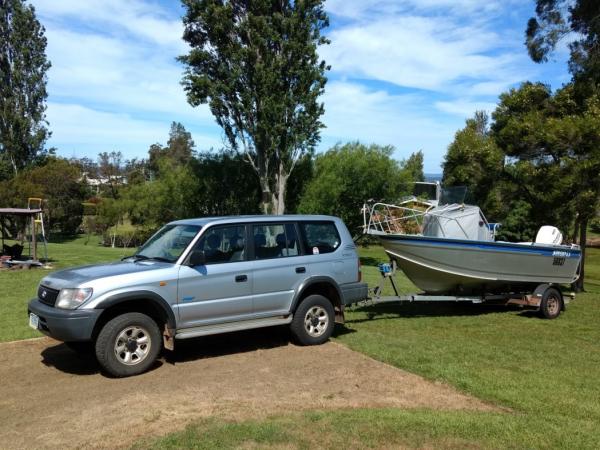 Unpacked in Dover, Tasmania and ready to go fishing 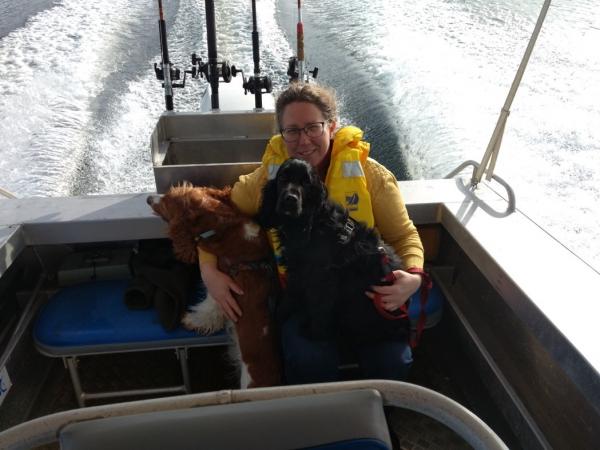 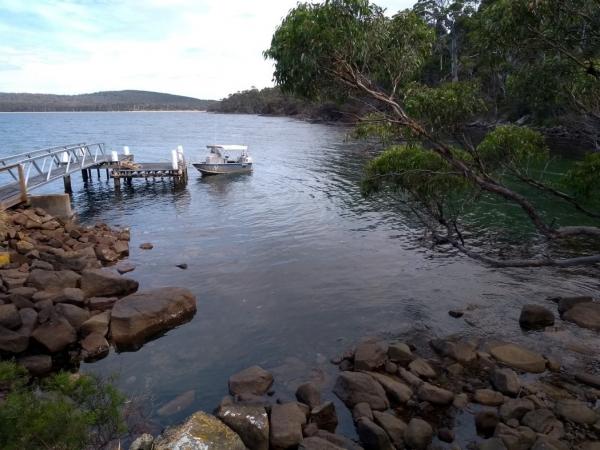 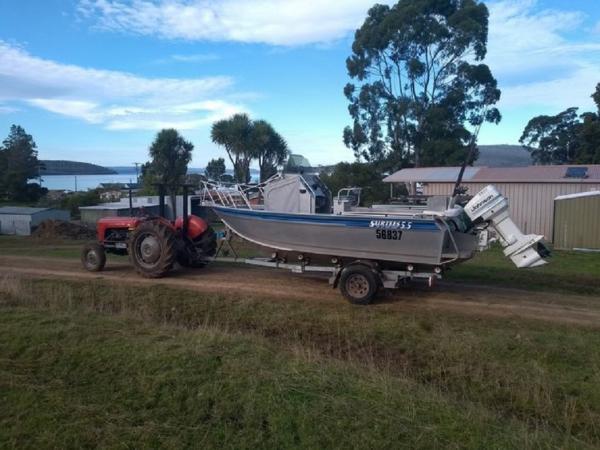 You can take the kid off the tractor but you can’t take the tractor off the kid. Born on Fregie 28 in the Waikato NZ, have now progressed to a Fergie 35 in Dover Tasmania